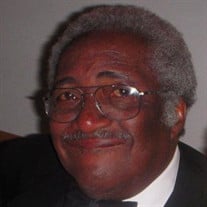 In Loving Memory On April 9, 2021, my dearly beloved husband of 28 years peacefully departed this life in the comfort of our home in Fort Washington, Maryland. Charles Edward Gwin was born on February 13, 1939 to the late Otha and Beatrice Gwin in Memphis, Tennessee. He was raised by his mother and grandparents Bishop Abraham and Louise Williams. He graduated from Booker T. Washington High School in 1957 and went on to LeMoyne College for a short period of time and of course he didn’t graduate 😊. But on July 19, 1961 he raised his right hand and selflessly committed 23 years, 10 months, and 9 days of honorable service to the United States Air Force. During his tenure in the Air Force, he served on various tours in the states and overseas including Vietnam where he earned the Bronze Star Medal. He also earned Four Oak Leaf Clusters on his Air Force Longevity Service Ribbon, Vietnam Service Medal, Republic of Vietnam Campaign Medal, and Six Oak Leaf Clusters on his Air Force Good Conduct Medal. He retired from the military in 1981 as a Technical Sergeant. Charles then went to work as a Deputy Clerk for the United States Bankruptcy Court where he retired after 20 years of dedicated service. On November 14, 1992, Charles dedicated the rest of his life to Thelma D. Gwin. Charles was devoted to his true love, his fussing “Yip Yip” wife Thelma. He loved this short woman more than anything in this world, including himself. They had mutual interests and shared many precious moments together. If you ask Charles how he’s doing he’d respond “Fine as Wine and Twice as Mellow”. He was an avid bowler and loved a wide range of music, everything from Country to Opera to the Big Band Sounds; but his favorite thing of all was sitting on the porch talking on the phone. He was a Prince Hall 3rd Degree Mason, 32nd Degree Prince, and a Shriner. He was a member of the American Legion, Veterans of Foreign Wars, and Military Order of the Cootie. He was also a member of St. Paul United Methodist Church and early on sang in the Men’s Choir. A Charles saying was “I Live the Life I Love, and Love the Life I Live”. Be happy and enjoy life as he did. He is survived by his wife, Thelma Deloris Gwin; his sister, Alcarcheetta Gwin; four step children: Vernell Jordan, Joyce Jones, George Wood, III, and Alicia Turrentine; five grandchildren; twelve great grandchildren; a host of family and friends residing in Maryland, Tennessee, Georgia, and Chicago; his Best Man George Stewart and good buddies: James Freeman, William Bush, and Ron Dickens. Interment: Thursday, April 22, 2021 at Maryland Veterans' Cemetery, Cheltenham, MD at 10:30am.

In Loving Memory On April 9, 2021, my dearly beloved husband of 28 years peacefully departed this life in the comfort of our home in Fort Washington, Maryland. Charles Edward Gwin was born on February 13, 1939 to the late Otha and Beatrice... View Obituary & Service Information

The family of Charles Edward Gwin created this Life Tributes page to make it easy to share your memories.

Send flowers to the Gwin family.