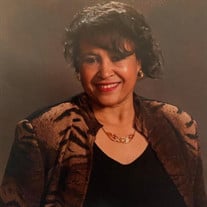 A Reflection of Life Celeste Sanchez was born on September 20, 1950 to the late Jose Mercedes Sanchez and Catalina Rosario Sanchez in the Dominican Republic. She attended public schools in San Francisco in the Dominican Republic. After finishing school, she moved to Santo Domingo, where she resided for many years. In 1983, she decided to travel to the United States. Upon her arrival, she found employment with the Mayflower Hotel in Washington, DC. She worked at the Mayflower for several years until she found an opportunity with The Ritz-Carlton Hotel in Pentagon City, VA. Celeste received several awards for her hard work and dedication. She received the “Five Star Employee of the Quarter Award”, “Marriott International-30 Years of Dedicated & Valuable Service Award”, and the “Employee of the Year Award”. Celeste was always cheerful and a giver. She was always willing and ready to help anyone wherever she could. Celeste was also an excellent cook. She would constantly prepare delicious meals for her family and at large family gatherings. You could always rely on her for support. Celeste was a long-time member of St. John United Baptist Church in Washington, D.C. You could always see her sitting in the back of the church enjoying the word with a smile. Celeste enjoyed being with her family and friends. She mostly enjoyed traveling, dancing, singing, going to church, and spending time with her many nieces/nephews, and adopted grandchildren. Celeste went to dwell in the house of the Lord on March 6, 2021 after suffering a long-term illness. She leaves behind her Sanchez family and her extended Gonzalez/Barett family. Celeste comes from a family of 11 siblings, which four preceded her in death, along with her parents. She goes on to reunite with Jose Mercedes Sanchez (father), Catalina Rosario Sanchez (mother), Jose Sanchez (brother), Divino Sanchez (brother), Altagracia Sanchez (sister) and Esperanza Sanchez (sister). She leaves to cherish her sister Ana Luisa Sanchez (Washington, DC), Felipa Sanchez (Italy), Felicia Sanchez (Italy), Petronila Sanchez (Italy), Catalina Sanchez (Italy), and Domingo Sanchez (Italy). Cousins, Ana Sanchez and Elizabeth Sanchez. Celeste has a devoted friend/sister of 35 years, Esperanza Gonzalez. They met when they were both working at the Mayfair Hotel. Celeste came to stay with the family and became family. She became a surrogate mother to Esperanza’s children: Manuel Jesus Gonzalez (Arica Gonzalez) and his children (Janelli Gonzalez, Manuel Jiovani Gonzalez, & Jaelle Gonzalez) as well as Donny Gonzalez (Rosa Ly Gonzalez) and his children (Donovan Manuel Gonzalez & Emery Hope Gonzalez). Also preceded in death, Ezperanza’s husband Manuel Gonzalez. Celeste became a close friend, aunt, and sister to the Gonzalez/Barrett family. She dearly loved everyone, and the family loved her unconditionally. She also has a good friend Janet Arias in the Dominican Republic that she was fond of. There was a host of family members, neighbors, coworkers, and friends that will miss her. In Memory of a Brave Woman You were one fantastic lady; you were amazing to see. You never, ever did complain or moan and say, “Why Me?” As you did your best to carry on, even though in poor health, you still supported others. You did not worry about yourself. You fought, and you did your best. You battled on and on. Now we feel such a terrible loss. Now that you have gone, but your memory will be treasured. It will live on, it is true, you were a much loved and brave woman. We are going to miss you! Love Always, The Gonzalez/Barrett Family

The family of Celeste Sanchez created this Life Tributes page to make it easy to share your memories.

A Reflection of Life
Celeste Sanchez was born on September 20,...

Send flowers to the Sanchez family.