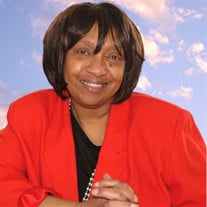 Carol Ann Jennings, was born on March 15, 1945 in Frederick, MD to Viola Jackson. Carol was the youngest of two siblings, Helen Jackson and Alvie Jackson (deceased). Carol was educated in the public school system of Frederick, MD. She graduated from Frederick High School in 1963. She moved to Prince George’s County, MD in the 1970’s, where she worked as a Teacher’s Aide for the Prince George’s County Public School System. She later worked for the Federal Government at the United States Department of Agriculture, from which she retired in 2004. Carol then returned to work in the Admissions Department at Prince George’s Community College. Carol married James Chester Jennings, Jr. on August 6, 1983. They were married for 37 years, until his passing in December 2020. From this union, they had one daughter, Candace Y. Jennings. Carol had numerous hobbies and interests. She was an avid crafter and loved making all kinds of crafts. She enjoyed card making and would send personalized cards to friends and family. She also enjoyed playing board games, especially word games, such as Scrabble. She also loved watching movies on The Hallmark Channel, as well as game shows on The Game Show Network. Carol was a devoted wife, mother, grandmother, sister, and aunt. She loved spending time with her daughter and grandchildren. She was very active in their lives and never missed a program, graduation, or birthday. She enjoyed taking them out to eat, especially at their favorite place, Dave and Busters. They would also have family game nights, where they would play different board games. She also enjoyed going on family vacations. Most recently, she went on a “Girl’s Trip” to Virginia Beach with Candace and her granddaughter, Ava. A few days before her passing, she went on a family vacation to Orlando. She was very happy to be able to spend that time with her grandchildren. She also loved going to Frederick and spending time with her sister, nieces, and nephews. Carol was an active member of Campbell A.M.E. Church, where she served on the Missionary Society, Stewardess Board, and Lay Organization. Carol was a member of the Adult Church School Class, the Wednesday night Bible Study Class, and also served as the YPD director at Campbell for many years. One of the events she enjoyed most was a Christmas Toy Store for the neighborhood children that she started. She is survived by those who mourn her passing:  her daughter Candace Jennings (Allante); CDR Glenda Jennings Harrison, CHC, USN, (ret); five grandchildren, Lahquisha Harrison Brooks (Tracy, Sr.) Tarik Asim Harrison, Damon Lamont Chester Battle, Amare Xavier Carlton, and Ava Simone Carlton; three great-grandchildren; Ashley Harrison, Tracy Brooks, Jr, and Ze’Veyon Paige, and two great-great grandsons; Cayden Touch and Kacey Brooks. Carol is also survived by her sister, Helen Jackson, and sisters-in-law: Jeanette Dyson, Adrienne Bennett (Curtis) and Patricia Jennings, and one brother-in-law, Charles Jennings (Sylvia). She also leaves to mourn many nieces, nephews, cousins, and a host of friends.

Carol Ann Jennings, was born on March 15, 1945 in Frederick, MD to Viola Jackson. Carol was the youngest of two siblings, Helen Jackson and Alvie Jackson (deceased). Carol was educated in the public school system of Frederick, MD. She graduated... View Obituary & Service Information

The family of Carol Ann Jennings created this Life Tributes page to make it easy to share your memories.

Send flowers to the Jennings family.