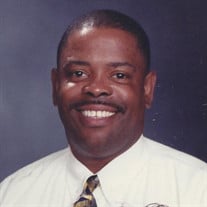 A TIME TO RISE: Benny began his life’s journey on April 28, 1959. He was the oldest of 6; with 3 girls and 2 boys to follow. Along his journey, he kept his parents, James & Jacqueline on their toes. A TIME TO LEARN: Benny was a proud product of the DC Public School system. He started at Emory Elementary, in NE; the family moved from North Capitol St to “Uptown” NW as it was referred to back in the day. He finished elementary school at Powell Elementary, moved on to Alice Deal Jr. High and Woodrow Wilson Senior High– where he excelled in the game of Ultimate Frisbee and was named Wilson Frisbee Team: Outstanding Player, 1976-1978. A TIME FOR FAMILY: Benny was the Father of 4 sons. Throughout his life, he worked hard to follow the example set by his Dad; though, James Edward was a tough act to follow. With the support of family, Donte and Benjamin were loved immensely. Later in life, Dustin and Eugene were introduced and we look forward to strengthening the family bond. A Time to Work & Serve: Benny held a variety of positions throughout his life, but primarily worked as a laborer. His zest for life along with his infectious personality allowed him to fine tune life skills that would stick with him. Benny’s maternal grandmother (Lillie) instilled a strong religious foundation throughout the family. In May 1974, he was baptized at the Zion Baptist Church and as an adult, later rededicated his life to Christ at the Mount Bethel Baptist Church. A Time for Unforgettable moments: Those life skills mentioned earlier came in handy. His love for the bright lights started in Jr High School. He was tagged to MC the end of year talent show. In his white tuxedo, he electrified the audience and folks talked of his performance for days after. Later in life, his love for music would surface in his overwhelming enjoyment of the music of the legendary performer- Prince. He didn’t miss a concert and even changed his hairstyle to keep in step. Other talents included: • Music Roadie; ask Cousin Andaiye: during her stint with the internationally acclaimed band, Divine Nature, Benny worked alongside and with his own style, introduced their act at the memorable Stone Soul Picnic • Lawyer; ask Cousin Pam Taylor: she swears by his courtroom prowess in DC Landlord Tenant Court • Debater; ask Cousins Wendell and Dennis & Brother Shawn: during their regular weekend meet up at Anacostia Park, Benny could get folks worked up in a tizzy on any & every subject • News Commentator; he checked in daily with Renetta for his version of the CNN update • Chauffeur; ask Cousin Toni: he loved riding shotgun with her and LaRue in the Lexus. Don’t forget the seniors at the Giant on Brentwood Rd; he could often be sought out and counted on to transport them back and forth on grocery store runs A TIME TO REST & MOURN: While his diagnosis of type-2 diabetes and weekly dialysis slowed him, it did not deter Benny from living life. As we are continually reminded- our plan is not God’s plan. Benny – “You fought a good fight, You finished your course, and You kept the faith.” Benny leaves 4 sons: Donte Barringer (Tonya), Benjamin Barringer, Dustin Saunders and Eugene Ballard; grandchildren: Aleila Barringer, Isaiah, Joseph, & Angel (Houston), Amari Fuller & Benjamin Barringer, Jr, Taliyah, Taniyah & Bentli (Jackson), Tamiya Hicks, Kaden & Kaleb (Saunders), Sayori & Akina (Ballard); 4 siblings: Renetta Washington (Roderick), Michelle Turner, Shawn Turner, & Jacqueline Conaway (Tyris); Two nephews: Marcus Turner & Roderick Washington, II; a sister in law, Deborah C. Turner; the Scott Unlimited Cousins, and a host of other relatives and friends. Benny was preceded in death by his brother; James (Jimmy) Turner in July 2020.

A TIME TO RISE: Benny began his life&#8217;s journey on April 28, 1959. He was the oldest of 6; with 3 girls and 2 boys to follow. Along his journey, he kept his parents, James & Jacqueline on their toes. A TIME TO LEARN: Benny was a proud... View Obituary & Service Information

The family of Benjamin W. Scott created this Life Tributes page to make it easy to share your memories.

Send flowers to the Scott family.