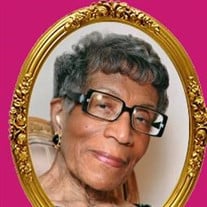 Obituary Beatrice Cleland McCabe passed away peacefully at home on November 6, 2021, following a prolonged period of in-home nursing care. She was 102 and had enjoyed a magnificent life. Beatrice was born in Boston, Massachusetts on December 10, 1918. She was the first born of two siblings from the union of John Mack Cleland and Marie L. Ward Cleland. Thomas Atwood Cleland, her brother, a decorated warrior, died during his 1946 return trip from World War II. And Irma Dockett Bright nee McCabe was raised as Beatrice’s “sister,” when Irma’s mother, Marie’s sister, passed away. Irma died in January 1998. Beatrice graduated from the Boston Girl’s High School before furthering her education at the Boston School of Business. She was bestowed the title “Premiere Role Model” class of 1937 by the Girl’s High School Alumni Association, in October 2006. Beatrice relocated to the District of Columbia over 80 years ago, in 1941, and began her professional career as a dedicated Civil Servant with the U.S. Department of Labor. There she became a pioneer. Working on the Advisory Committee of the Occupational Safety and Health Administration (OSHA), she was the only woman to serve in this capacity that helped establish the framework for its early beginnings. Over the years, her job performance was rewarded with advancement, including the significant promotion which rendered her one of the first “Negroes” to support White managers in the Federal Government. By the time of her retirement in 1979, she had ascended to the prestigious position of OSHA Records Manager. Her positive legacy led some of her co-workers to annually celebrate her retirement with a luncheon at her home. Beatrice married the love of her life, Elisha “Bud” McCabe, on May 18, 1947 at John Wesley AME Zion Church. They shared a compatible and loving relationship and lived a glamorous lifestyle until “Bud” died after a brief illness on March 17, 1984. After some time, “Ms. Bea” as she became affectionately known, continued a sensational lifestyle, traveling and entertaining with a long-time friend, Theodore “Ted” Adams, most often at her side, until he too unfortunately died. Beatrice was an Honorary Alumna of Livingstone College. Her love for Livingstone was instilled by her mother, a graduate of the College. Continuing a family legacy of support dating back to the 1800’s, Beatrice generously supported Livingstone College financially and became active in the Washington, DC Chapter of the National Alumni Association. The highlight of her life came in February 2006 when Livingstone College inducted her into its Hall of Fame as an Honorary Alumna. Beatrice responded, “I graciously accept and dedicate this high honor to the memory of my mother, Marie Ward Cleland, my role model, and my mentor, who graduated from Livingstone 100 years ago - Class of 1905.”   PAGE 3 SHE LIVED A MANY-FACETED LIFE Beatrice was a faithful, dedicated and committed member of John Wesley AME Zion Church for over 75 years. She served in several church ministries and organizations: Life Member (Matron) of the Women’s Home and Overseas Missionary Society, the Cathedral Choir, the Organ Guild, Stewardess Emerita, and the Calendar Club. She was a Charter Member of the E. Franklin Jackson Flower Guild. She expressed her love for John Wesley through her extraordinary generous financial donations for many decades. Beatrice remained an active member of John Wesley until her health declined, and she was unable to physically attend church. However, she continued her support until the end. She thanks God for a life well lived and often sings out, “To God be the Glory for the things He has done for me!” Beatrice leaves behind a host of loving nephews and nieces: on the Dockett side, Dr. Ronald and Joan Miller née Dockett; and on the McCabe side, William Earl Jr., Danny, Timothy, Nezettia Stevens nee McCabe, and Theresa Adkins nee McCabe; their 15 children; and a devoted godson Paul Lewis. In lieu of flowers, tax-deductible donations may be made to Mrs. McCabe's favorite charity, LivingstoneCollege/Giving/.

Obituary Beatrice Cleland McCabe passed away peacefully at home on November 6, 2021, following a prolonged period of in-home nursing care. She was 102 and had enjoyed a magnificent... View Obituary & Service Information

The family of Beatrice C. McCabe created this Life Tributes page to make it easy to share your memories.

Send flowers to the McCabe family.