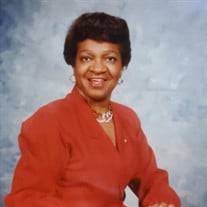 Barbara Lee Wilcher was born July 4,1936 in Washington, D.C. to the late Philip and Leona Thompson. She transitioned from earth to Glory on March 26, 2022, at Southern Maryland Hospital in Clinton, MD and was also proceeded in death by her five brothers. Barbara Thompson married Lee Andrew Wilcher (deceased) and to this union six children were born: Mother of (4) daughters Sheila Boyd, Deborah Richardson, Gaila Queen and Valerie Barnes, (2) sons Dewayne Wilcher and Gregory Wilcher (deceased), Barbara shared spiritual times with them at Edgewood Baptist Church and New Southern Rock Baptist church where she was a member of the choirs. In her later years, she joined Greater Revelations Baptist Church and then, The Master’s Touch Praise Ministries.  Her spirit and lineage live on through her children, 16 grandchildren, 27 great grandchildren, four great-great grandchildren, friends, and her loving caregivers of the last eight years of her life. Barbara was a phenomenal woman and believer in her Savior as Almighty GOD. She attended Cardoza High School graduating in 1958 and later pursued her advanced education at Southeastern University earning an associate’s and bachelor’s degree in Business Administration in 1995 and 1996 while maintaining a full-time position as a lead secretary with the Environmental Protection Agency (EPA). Prior to spending 33 years in the federal government with the EPA and General Accounting Office (GAO), she worked alongside her mother at the prestigious Army Navy Club of Washington, D.C. Her retirement allowed her to devote significant time to her ailing mother and father. Barbara had a penchant for sales. She was a dedicated and determined entrepreneur selling everything through the years from tickets for cabarets and raffles, to MaryKay, Avon, Tupperware, Home Décor and was determined to excel in whatever business decision she made. Her efforts developed a spirit of sales within her children as well. Barbara enjoyed traveling visiting many places starting as a youth in the Bronx, NY visiting her grandparents. As an adult she visited New Orleans, Hawaii, England and Germany and regularly scheduled bus trips to Atlantic City, Pennsylvania Dutch Country, and Georgia. She enjoyed playing cards with her family and friends where their games would continue until daybreak. She enjoyed dancing and would always say “you can’t out dance me” and always loved bargain shopping at auctions and yard sales.   Her mothering spirit allowed Barbara to serve as a Den mother for the Boy scouts and a foster mom; the latter experience shared by her daughters. She explored swimming lessons and often enjoyed planning and organizing summer picnics at Haine’s Point (D.C.) with family and friends. Barbara was deeply rooted in all her children; she was always there to support them in their endeavors. “She was a fixer.” While battling diabetes since the age of 18 years old, the accumulation of other illnesses and challenges never dampened her spirit, nor her zest for life. She was always camera ready for a picture. Barbara Lee Wilcher’s interment of her earthly body will be laid next to her parents at Maryland National Memorial Cemetery in Laurel, MD. You will truly be missed for your courage, strength, wisdom, and love.

Barbara Lee Wilcher was born July 4,1936 in Washington, D.C. to the late Philip and Leona Thompson. She transitioned from earth to Glory on March 26, 2022, at Southern Maryland Hospital in Clinton, MD and was also proceeded in death by her... View Obituary & Service Information

The family of Barbara Lee Wilcher created this Life Tributes page to make it easy to share your memories.

Send flowers to the Wilcher family.