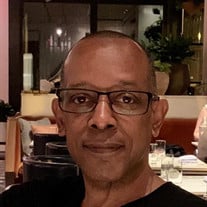 Arnold Anthony Smith peacefully departed this life on Thursday, July 29, 2021, at his home in Washington, DC. He was the son of Dr. Ethel Canty Smith Bothuel and the late Charles Edmond Smith. He was born on June 3, 1963, in Camp Springs, Maryland. Arnold was known as a kind, gentle, and caring person whose outlook on life was almost always positive and inspiring. He took great pride in helping others. At an early age, Arnold joined Campbell AME Church—the church in which he grew into adulthood—and was a part of the Sunday School, the youth choir, the instrument ensemble led by one of the members of the church and participated in many youth ministry activities. As Arnold was growing up he and his older brother looked forward to spending summers in Charleston, South Carolina, with his grandparents who influenced him with their strong Christian values especially as it relates to “treating people the way you want to be treated.” He attended Prince Georges County public schools and played in several ensembles of the Surratsville High School band. He attended Jackson State University where he studied music and information technology. He was blessed with such a musical gift that he could be called upon to play four of the six types of saxophones –soprano, alto, tenor, and baritone. However, the flute was his favorite instrument and he played it well. In his early years, he played his instruments in school, church, and for special events. Arnold’s professional work in information technology took him to the Federal Reserve Board where he worked as an IT Analyst until his death. He often talked about the joy of working with his colleagues at The Board. His family has significant respect for and gratitude toward Arnold’s supervisors and co-workers for their continuing support of him during his illness. From beginning to the end of his illness, Arnold’s supervisors at The Board exhibited a caring that is not often seen in the workplace. The family thanks you! While at The Board, he not only enjoyed his job assignments, but he also enjoyed participating in fitness workouts sometimes leading in workout programs. His workout regimen also prepared him to participate in the Marine Corp marathon sports events at Quantico, bike riding events, and more. Arnold enjoyed three hobbies: Bowling, Photography, and Cooking. He excelled in them all. He was an avid bowler locally and nationally in regular season and tournaments achieving at least one 300 game. He loved this sport and played in several leagues over the years including the bowling league of the First Baptist Church of Vienna (VA) and CAMP of which he was president and photographer. He continued to bowl until his health prevented his participation. His photography website contains beautiful landscapes, sunsets, other marvels of nature, and images of people and places. A quick look at his FB postings will show his love of cooking. He took great pride in preparing to feed family and friends. These gatherings were feasts beyond delectable and there was always Arnold’s cookies that left everyone wanting more. To cherish loving memories of his life are his devoted mother, Dr. Bothuel, his loving husband, Michael A. Turner, two caring brothers Charles E. Smith II of Washington, DC, and Marvin Bothuel II (Danielle) of Silver Spring, Maryland, nieces, nephews, cousins, and many, many friends and colleagues. He is preceded in death by his father, Charles E. Smith. Yes, we will miss his presence, but we will hold his kindness in our hearts. There are some who bring so great a light into the world, that even after they are gone, the light still shines

Arnold Anthony Smith peacefully departed this life on Thursday, July 29, 2021, at his home in Washington, DC. He was the son of Dr. Ethel Canty Smith Bothuel and the late Charles Edmond Smith. He was born on June 3, 1963, in Camp Springs,... View Obituary & Service Information

The family of Arnold Anthony Smith created this Life Tributes page to make it easy to share your memories.