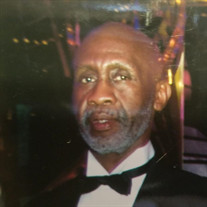 Alphonso Hines was born on July 16, 1952 in Rocky Mount, North Carolina at his home on Matthew Street. He was born to and preceded in death by mother Willie Mae Hines and Willie Macon. He was the 2nd oldest of 13 siblings. He was educated in the Edgecombe County School System in Rocky Mount, NC. At an early age he began to work and help rear his siblings alongside his grandmother, Cora Hines. He moved to Washington, DC in 1974 with family. At this time he began working at a local store, Normandy’s in SW DC, and later moved on to a delivery position at Peoples Drug Store. He also worked at Arlington Cemetery in the landscaping department. Alphonso enrolled in Bladensburg Barber School and later became a master barber in 1998. His barbering career lasted over 45 years as he was most noted for his barbershop on Martin Luther King Jr Avenue in Southeast D.C. It was here, at Troyitt’s Barbershop, that many long lasting relationships were formed. He was dedicated to his proprietorship at the shop and maintained the upkeep as early as 6am most mornings. Other shops include, but are not limited to, Travitt’s on Sheriff Road, Smokey’s on H street, Bowties & Barbers, and most recently LA cuts on MLK Ave until the forced closure due to the pandemic. Al provided free haircuts to people in need whether it was at the shop, at home, or at nursing homes and hospitals. He also would cook and take food to “the Avenue” and feed people for free. Alphonso was a fisherman. He would leave early in the morning and head to the shore with his “fishing buddies”. Destinations include but certainly are not limited to Solomon’s Island, Delaware, and Kent Narrow. He would fish and bring fresh fish home to scale, fry, and serve. If you were lucky enough he would give you a free bag of fresh fish. He made friends with the captains and would often pack a care full of guys to ride to the shore with him. Alphonso prided himself in his appearance and was a sharp dresser. He owned a lot of suits, hats, and shoes. He began to teach his grandsons how to put clothes together as well as groom hair. His favorite store to shop for clothes was Macy’s. He loved to watch cooking shows and “experiment” in the kitchen. He noted cooking alongside his grandmother at an early age as an inspiration and was very heavy handed in the kitchen by making big meals for his family. Alphonso loved to travel around the city and North Carolina visiting friends and family and oftentimes was not empty handed. He enjoyed stopping at his favorite stores in NC to bring country sausage, BBQ, and hush puppies back to DC. He enjoyed spending time with his grandsons and would drop everything if they needed him. Everyone was deeply saddened by the passing of Al and a huge void will be felt amongst family, friends, and customers. Alphonso leaves to cherish his memory; wife of 49 years Ophelia Grimes-Hines, that he affectionately called “Fran”. From this union a daughter, Candice B. Hines(Charles) and three grandsons Cashton Hines, Casen Dunlap, Chance Dunlap. A son, Khaleel Shakir and his twin sons, Deon and Tayon. Siblings, Otis Hines, Kathy Hines, Peggy Hines, Sharon Hines, Phyllis Hines, John Calvin Hines, Jeffrey Hines, and Ricky Andrews, and God-Family the Grimes family. He was preceded in death by siblings Donald Ray Hines, Joe Ann Hines, Sylvia Hines, and Robert Lee Hines. He was also preceded in death by great-grandparents Cora and Handy Hines, grandmother Effie Hines, and mother Willie Mae Hines.

Alphonso Hines was born on July 16, 1952 in Rocky Mount, North Carolina at his home on Matthew Street. He was born to and preceded in death by mother Willie Mae Hines and Willie Macon. He was the 2nd oldest of 13 siblings. He was educated in... View Obituary & Service Information

The family of Alphonso Hines created this Life Tributes page to make it easy to share your memories.

Send flowers to the Hines family.