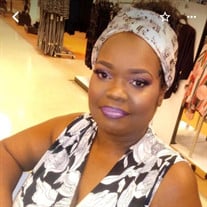 “IF ANYBODY ASKS YOU WHO I AM, TELL THEM I'M A CHILD OF GOD” Alice LaShawn Lynnette Wilson-Harris, the mother of Courtney, Corey, Christin, Renee' and Tiffinay Harris peacefully, on Sunday, July 4, 2021 at the Fairfax INOVA Virginia Hospital. The message of La Shawn's life is a message of God's ever reaching endless love – His never ending pursuit – His compassionate embrace and tender care toward one made by Him. God loved each of us through her. She was born at the Naval Military Hospital, in Chelsea, MA, July 18, 1962 to Raymond J. and Mignon J. Wilson. LaShawn was a fifth generation of seven generations of Wilsons in the Washington, DC area. Her grandfather, James Wilson, Sr. was the first DC Chapter and National President of seven chapters of the Wilson, Lake and Herbert Family Reunion Circle which started in 1968. The family will be celebrating its' fifty-third anniversary this Labor Day Holiday. Her beautiful, melodic voice will be sorely missed this year at the family gathering. LaShawn attended primary and secondary schools in Washington, DC, (Anne Beers Elementary, Jesse LaSalle Elementary, Bertie Backus Jr. High and Western Sr. High which later became 'Duke Ellington', School of the Performing Arts). She was of the first full four year graduating students of the performing arts school. While at the arts school, she soon started entering talent shows, around the city, and performing for and with the D. C. Youth Chorale, where she became fortunate to perform for president Jimmy Carter and later president Bill Clinton, she also performed in the production of “Santa and the Super Heroes at the Aldridge Theater At Howard University. Upon graduating from 'Duke Ellington, she furthered her studies at the Philadelphia School of Performing Arts where she majored in music and voice. She spoke and sang in five languages. At a young age, she willing accepted Jesus Christ as her Lord and Savior at the Union Wesley, African Methodist Episcopal Zion Church in Washington, DC . (Dr. George L Smith, pastor) where she joyfully and faithfully worshiped in the Sunday school ministry, the scouting program, children's choir and after college, she participated in all capacities that used her skills as she grew in her faith. She volunteered at the neighborhood youth center and the American Heart Association, With a good faith base and moral support, she struck out on her own, into the work world and her first apartment, shared with her sister, Stephanie. In 1986, she married Ronald Harris and they started a family. She sought out a new church home, (First National Deliverance Center). LaShawn loved her church family, as much as she loved the Lord. She never forgot who she was or whose she was. She lived for Christ and the church. (Remember, only what you do for Christ will last) She was employed, first, at J.W. Marriott Hotel in W. DC, and then with CareFirst/Blue Cross, Blue Shield for over fifteen years until her transition. She leaves to cherish her memory, four daughters, Courtney, Christin, Renee, Tiffany and one son, Corey/Ashleigh, 11 Grandchildren and 4 great grands and a host of family and friends. “And I will live in the house of the Lord forever”

&#8220;IF ANYBODY ASKS YOU WHO I AM, TELL THEM I'M A CHILD OF GOD&#8221; Alice LaShawn Lynnette Wilson-Harris, the mother of Courtney, Corey, Christin, Renee' and Tiffinay Harris peacefully, on Sunday, July 4, 2021 at the Fairfax INOVA... View Obituary & Service Information

The family of Alice Lashawn Harris created this Life Tributes page to make it easy to share your memories.

Send flowers to the Harris family.