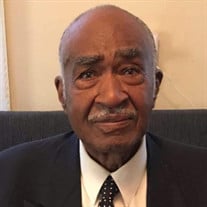 Albert Medley, Jr. fondly known as “Slick” to many was born April 7, 1932, in South Boston, Virginia to the late Albert and Ludelia (Wood) Medley. He departed this earthly life on Tuesday, March 1, 2022, at Capitol Region Medical Center in Largo, Maryland. Albert was preceded in death by his wife Betty, son Albert Medley, III and his six siblings. Albert was educated in the public schools of Halifax County. He joined the United States Army in 1952 and served until his honorable discharge in 1954. Albert was proud of his military service and spoke fondly of his experience as a soldier. In August 1955, Albert was joined in Holy Matrimony to Betty V. (Boyd) Medley. For 58 years Albert and Betty cleaved to each other fulfilling their vow of until death do us part. From this union God blessed them with four children, Christine Virginia, Albert III (deceased), Geraldine and Matthew. Albert was a true family man that instilled Christian values in his children. He spent quality time with his family doing various activities. He loved spoiling his grandchildren and great grandchildren. In their eyes he was the best Grandpa ever. Albert had a jovial spirit that was loved by all. His nieces and nephews knew laughter would fill the room when “Uncle Slick”, as he was fondly called was present. He loved to tell stories of his childhood and military experiences. Albert was always ready to lend a helping hand to his church, neighbors, friends and family. Albert’s Christian life began at an early age when he joined Williams Temple CME Church in News Ferry, VA. Upon moving to the Washington, DC area, Albert joined Roberts Memorial United Methodist Church and later transferring his membership to Contee A.M.E. Zion Church where he served as a faithful member until his health declined. Over the years he served in many capacities to include; Class Leader, Steward Board, and Lay Council. He proudly served on the Senior Usher Board for many years. He always welcomed members and visitors with his charming smile. Albert was a member of the Senior Ministry “God’s Den” where he enjoyed participating in various activities. He thoroughly enjoyed their outings to different venues and restaurants; especially “Golden Coral” for the all you can eat buffet. Upon his return from the military, Albert was employed with Greys Construction Company as a Master Welder. He went on to pursue self-employment as a Taxi Driver with Globe Cab Company for 30 years before retiring in 2003. Albert enjoyed driving his taxi throughout the city and his pleasant personality gave his passengers joy. After retirement he spent time gardening at the Fort Dupont Community Garden. He won several gardening awards and bragged regularly about his delicious fresh vegetables. Albert also enjoyed doing home improvement projects and provided his services to others over the years. Albert leaves a legacy of love and family dedication that will forever be cherished by his children, Christine (Marvin), Geraldine and Matthew (Talita); Grandchildren, Rashawn, Meaka, Jamia (Peter), Catina (Marcus), Daniel, Talia and Matthew; Great-Grandchildren, Sydney, Xavier, Charlee, Baraki, Zyana, Laila, Marcus, Jr. and a host of relatives and friends.

Albert Medley, Jr. fondly known as &#8220;Slick&#8221; to many was born April 7, 1932, in South Boston, Virginia to the late Albert and Ludelia (Wood) Medley. He departed this earthly life on Tuesday, March 1, 2022, at Capitol Region Medical... View Obituary & Service Information

The family of Albert Medley, Jr. created this Life Tributes page to make it easy to share your memories.

Albert Medley, Jr. fondly known as “Slick” to many was born April...